Technology is critical for innovation, yet schools struggle to get students interested in this area. Could teaching robotics change this?

The Queensland government has just announced plans to make teaching robotics compulsory in its new curriculum – aimed at students from prep through to year 10.

Robotics matches the new digital technologies curriculum, strongly supported by the university sector and states, including Victoria. But while, worldwide, there are increasing initiatives such as the Robotics Academy in the US to teach robotics in schools, Australia isn’t doing enough to get it taught in schools.

To explain why we should teach children how to program robots in schools, we first need to understand what a robot is.

South Korea’s intelligent robot ‘Irobi’ can teach English conversation through installed programs updated by the internet, and is operated by remote control and the human voice. Essentially, a robot is a mechanical device that can be programmed to follow a set of instructions.

The robot has a processing unit, sensors to perceive its environment, and motors and actuators to move its limbs or wheels. It may speak, make other sounds, or flash with lights and colours in response to the environment as per instructions.

Robots need the ability to follow programmed instructions and not just be controlled remotely.

Why should it be taught in schools?

There is considerable anecdotal evidence that students respond well in subjects involving programming of robots.

Plenty of resources are available on the internet for parents and teachers, for example, robot kits such as Lego Mindstorms and Vex Robotics, simple programmable robots such as Sphero balls, and lesson plans. Sophisticated, engaging robots such as the NAO robot are also available.

Robots lend themselves to do-it-yourself activities. For example, a colleague builds robots using a 3D printer and uses his smartphone as an interactive device to communicate with the printed robot.

Here are five reasons to teach robotics in schools:

There are several competitions for a range of age groups that can channel competitive instincts in a positive way. For example, asking children to build a robot from a Lego set and then running a race to see which robot goes fastest works well.

In my experience, the two most engaging ways of introducing IT in the curriculum are robotics and computer game design.

2. An effective way of introducing programming to students

Programming can be too abstract. By having to control a physical robot and seeing what goes wrong, students learn what robots can and can’t-do. They also learn the need for precise instructions.

There’s no doubt that there will be a need for people to be involved in programming mechanical devices in the foreseeable future. The drone industry has taken off. According to The Economist, more than 15,000 drones are being sold in the US each month.

By programming robots, students can discover if they have aptitude and interest in a job market of the future.

4. Suitable for children with a range of abilities

There is [considerable evidence](http://scazlab.yale.edu/sites/default/files/files/annurev-bioeng-071811-150036(1) that robots are particularly suitable for engaging with children on the autism spectrum. Children on the spectrum respond to the calm, clear, consistent interactions that robots can provide.

Many stories in the media concern robots – one of the most recent focus on a report urging the United Nations to ban drones and “killer robots”.

Another report by the Committee for Economic Development of Australia warned that robots could replace 40% of Australian jobs by 2025 – which equates to around 5 million jobs over the next two decades.

Understanding what machines can and can’t do is the best way to address fears.

Experience in trying to build and program robots gives an appreciation of their capabilities and strengths. Personally, I am looking forward to more robotic help in the future. 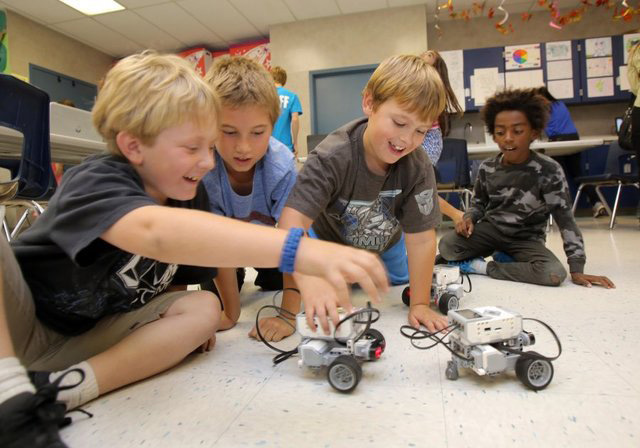 Article Name
5 Reasons to Teach Children Robotics
Description
Educate Kids with Robotics Technology is critical for innovation, yet schools struggle to get students interested in this area. Could teaching robotics change this? The Queensland government has just announced plans to make teaching robotics compulsory in its new curriculum – aimed at students from prep through to year 10.
Author
Mark Woodland
Publisher Name
Xplor
Publisher Logo