Mark Woodland: Xplor and with a decent market share we’d probably be a $6 to $700 million company.

Daniel Kjellsson: When Mark Woodland told his friends that he was going to quit the  Army, put his own ambitions aside to help his mother run a daycare centre, not a lot of people thought that this was a horse to bet on. Today though, he’s entrepreneur of the year with an estimated net worth of 54 million dollars and more importantly, he and his crew are helping to revolutionize the way we educate our kids. Great to have you here, Mark.

Mark Woodland: Yeah, thanks for having me.

Daniel Kjellsson: Thank you. I’m a father. My boy is about to head in to daycare, how do you touch my life?

Mark Woodland: If you think about why you’re going to daycare or why you go to school, or why you want your child to learn, that’s really education. You could probably look after your child at home, in the office, wherever but you want them to interact with other children, you want them to learn, you want teachers to teach. That’s your expectation and that’s why you’re happy to pay. You’re not happy to pay if it’s not achieving your educational goals for your child, whatever they may be. So the first thing we’re doing is letting teachers teach, and I’ve yet to meet a teacher that studies four or five years just to go into the office and do some administration and sit there all day, writing documentation and observations on what your child might be doing.

That’s nice but I think you’d rather have them interacting. So the first thing is we rip all that out and we remove it and let teachers teach your child so you get that education piece. And while they’re teaching, we connect you with the teacher and your child through our communication platform when you’re seeing photos and videos of what the child’s doing throughout the day. And so that’s how we’re giving teachers really back to the parent, and we’re giving teachers back to education again. And instead of hiring administrators, we can hire teachers.

Primarily teachers back to the kids.

Yeah, it’s not that hard. Let them teach and let them be great teachers, and let our kids be wonderful learners and be excited about learning. So when they do get to school, they’re excited, they’re passionate. I want to learn about this. I want to learn about this. So they come home in the afternoon and you know what your child’s been doing all day and you continue the learning on.

Daniel Kjellsson: Give us one of those use cases where you changed the daily life of the teacher and the child.

Mark Woodland: It starts from the start. The example is, you’ll drop your child off at work, they might be crying and they’ll be upset. You have to hand them over to a stranger pretty much, you might know them just from your daily interactions but technically a stranger. But long story short is you’re going to have to go to work somehow knowing that the last time you saw your child was screaming, upset, “Daddy don’t go,” or the thousand things they might say. And you have to somehow work throughout the day and be productive, do an interview. But really, you’re not really thinking about me, you’re thinking about what your child’s doing.

So the first thing we do is we connect the family, and that is as simple as being able to take a photo or video, and in my own sense it was really easy. Before Xplor I’d have to call you up, say, “Hey, Dan, it’s alright, your child’s fine. You have to believe me.” And 90% of the time you’re just thinking, “Mark’s just telling me what I want to hear.” If I can send you a photo or video of your child smiling, happy, riding the bike, in the sandpit, you’re good.

Daniel Kjellsson: What is the size of the market you’re after?

Mark Woodland: The child care market, there are about 17,000 centres in Australia today growing. The average size of a child care centre is about 80 children, so 80 licensed places. Some are more, some are less but let’s just say 80 is an average. Usually, there are about 100 families in those centres ’cause not everyone comes five days a week. And so, Xplor and with a decent market share, we’d probably be a $6 to $700 million company.

Daniel Kjellsson: And that’s when, when you talk to people there’s a little tickle in their eye?

Mark Woodland: Yeah, that’s right. There’s definitely a business case to it. We don’t do this because it’s fun but our impact statement is to change education. So we’re not against money but we’re not doing this to make money.

Daniel Kjellsson: The Xplor product, correct me if I’m wrong, you make it easier to run a daycare to free time for the educators to educate the children.

Mark Woodland: It’s pretty accurate. So we look at three people when we build product and features for Xplor, and then ultimately when we sell the product into the centre. We’re looking at the centre first and in the Xplor world we think that you focus on the business first and you make it efficient, you make it great, you help them with the enrolments, you help them automate their fee collection, which takes up a good chunk of their time. And if you’ve got three or four people in the admin office doing those things, then those three or four people aren’t with the children or teaching. So we focus on that person first and we help them become efficient. So we’re selling efficiencies in automation to the service owner.

The second piece of our puzzle is the educator, and I’m yet to meet a teacher, an educatorthat studies four or five years, they go sit in an office and be happy writing report cards or entering things into the database, it doesn’t happen. People learn to become teachers ’cause they wanna teach, so let them teach. So what we’re doing is, removing the regulation and the administration, which is important but it’s not as important as teaching. Technology’s very good at doing those mundane tasks that teachers shouldn’t have to do. So we sell time back to the educators.

Xplor, the Rocket, and Mark

Daniel Kjellsson: Tell me about your relationship with the company.

It’s definitely personal. People talk about their start-up as their baby and like Xplor to me really is, it’s a living breathing thing. Now we have our logo as a rocket. And so, we talk about the rocket as, look after the rocket, we use analogies of flying through space and getting hit with meteorites and it’s taking hit after hit for us. What are we doing for the rocket? Xplor is this thing that we all aspire to be and so I’m very connected to it. Xplor is much bigger than myself now. It’s not Mark, it’s not anyone now, it’s Xplor, which is really, really cool to see. So it’s just grown into this thing and it needs a lot of love. It’s just like a newborn baby, it just doesn’t start walking. It needs so much love and I think a lot of people missed that.

The Sacrifice and Drive

Daniel Kjellsson: Yeah. Looking back at the journey so far, is there any moment in particular that makes you emotional?

Mark Woodland: No sane person’s going to do what most founders do cause they’re much smarter than us. They actually have the brains not to do it. It’s really those founders that have that passion and that emotion to keep going. But there’s been lots of things that I thought were sort of deal breakers, end of the world stuff and the next day came and the next day came and you sort of refocused and keep going. I guess the biggest thing that sits with me that’s outside Xplor is, sitting with… Not anything like a table but a child’s table with my mother and I’d sit there and say, “We’re not going to be able to survive until next month.” And then, next month came and somehow we survived and we survived and we survived. And the rest is history but that’s the sort of the struggle and the stuff that you don’t see.

It’s very easy to be negative like it’s easy. It doesn’t take us any effort to say, can’t be done, this is too hard, it is so easy. So I think every day you got to pull yourself out of that and figure how, let’s just do it. How we’re going do it? The boys are tough. So, unless you’re passionate about it, don’t do it. Unless you really wake up thinking about it or go to sleep thinking about it. Or happy to miss your child’s whatever, for it, which I’ve done already far too many times in my child’s short history of living, don’t do it. You’re going to have to sacrifice like you’ve never done before and people I don’t think, “Ah, yes, I cannot go to that party.” It’s a little deeper than that.

Daniel Kjellsson: What do you think that drive is about? Because you and I could both be with our families right now.

Daniel Kjellsson: But we choose to be here.

Daniel Kjellsson: And yes, there’s a part, an intellectual fulfillment is part of happiness, but still.

Mark Woodland: I guess ultimately, am I happy to sit on my deck or whatever analogy and whinge about the world and look back in 80 years time and you have to say to whoever is sitting next to me, at least I did something. Or am I going to sit there still whinging about all the problems of the world and do nothing about it? You’ve got to figure out whinge or not or do something about it. I had less than you when I started, so what’s the problem? It’s got nothing to do with assets or connections or anything like that, it’s just pure drive. So it’s really, are you going to do something about it or are you going to sit and watch? I just chose, I’d like to do something done. 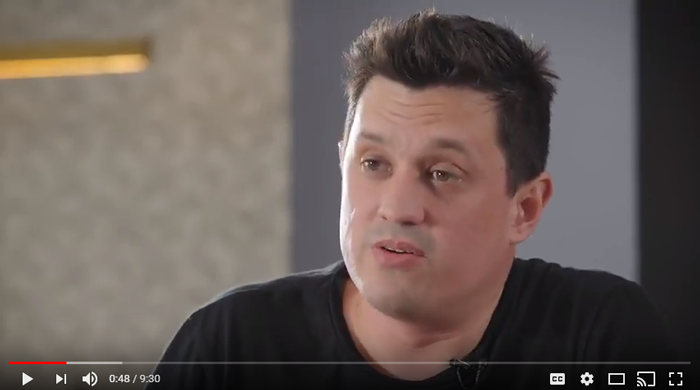 Article Name
Beer with edutech entrepreneur – Mark Woodland
Description
When Mark Woodland told his friends that he was going to quit the  Army, put his own ambitions aside to help his mother run a daycare centre, not a lot of people thought that this was a horse to bet on. Today though, he's entrepreneur of the year with an estimated net worth of 54 million dollars and more importantly, he and his crew are helping to revolutionize the way we educate our kids
Publisher Name
Xplor
Publisher Logo

Any cookies that may not be particularly necessary for the website to function and is used specifically to collect user personal data via analytics, ads, other embedded contents are termed as non-necessary cookies. It is mandatory to procure user consent prior to running these cookies on your website.